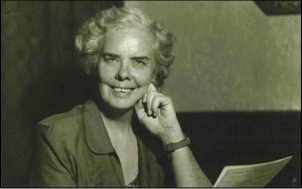 Dr. Janet G. Travell (pictured above) is known as the discoverer of myofascial trigger points and developed a therapy to eliminate them.  She was John F. Kennedy’s physician and the only doctor able to help him with his debilitating back pain.

Dr. Travell originally used injections of Lidocaine or saline.  Later she abandoned injected solutions, finding that an empty syringe inserted into the trigger point deactivated the point just as well (which is why acupuncture also works well with trigger points).  However, some stubborn trigger points may require sustained manual pressure followed by cross fiber manual therapy and gentle stretching to prevent the trigger point from returning to its hypertonic state.

Trigger Points are one of the largest and perhaps least addressed causes of debilitating physical pain in the body.  In acupuncture, these are sometimes erroneously referred to as ashi points - localized regions of sensitivity and pain.  However, a true trigger point is a little more complicated and can actually disrupt nerve signals, affecting the normal functioning of healthy tissues.  As a result, the pain felt is often experienced far away from the trigger point causing it.  This is what is called “referred pain”.  For example, knee pain is often caused by tight muscles in the thigh.

This is why massages for low back pain are often useless: the cause of the pain is located in surrounding and deeper muscle groups.  It’s kind of like having engine trouble in your car - it’s not going to get fixed by polishing the hood!

Deactivating a trigger point essentially involves identifying the trigger point and applying pressure to it.  This causes some discomfort, but as the pressure is sustained, the pain actually starts to reduce until only pressure is felt.

Is another method of releaseing trigger points and softening the muscles and connective tissue called "fascia".  Fascia is a continous sheath of connective tissue that surrounds every muscle, organ, and bone, allowing the parts of the body to slide past one another.  However, fascia can also become very restricted and rigid.

Fasia is the reason why an acupuncture needle placed at the pinky toe can help release a headache:  the needle is creating a little bit of "slack" in the fascial sheath that extends from the foot, though the back, and up to the neck. The technique of Myofascial Release looks like massage in super slow motion, going deeper than the muscle layer and engaging fascia to smooth out, stretch, and soften myofascial layers and trigger points.